Are you concerned about the new PCB screening requirement affecting building demolitions in the San Francisco Bay area? If you’re a commercial building owner or building construction contractor, you should be — even if you don’t operate in California.

Anyone wishing to demolish a building in much of the San Francisco Bay Area must now determine whether a structure covered under the new rule is likely to harbor PCB-containing building materials. If so, the permitting process requires a pre-demolition PCBs screening assessment before a permit can be issued. 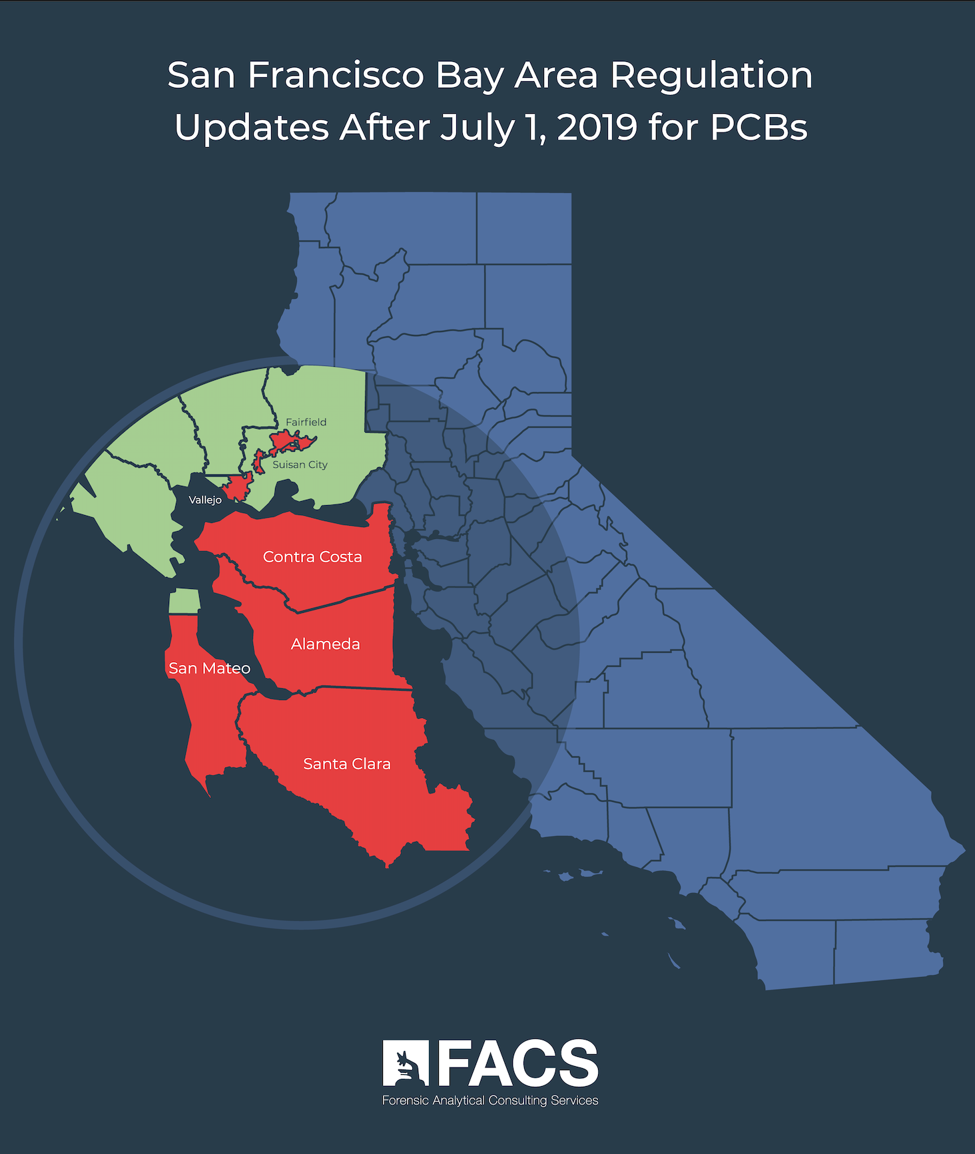 Unfortunately, many property owners and building contractors are still unaware of the requirement. That lapse is leading to project delays and cost overruns that could have been avoided had the BASMAA guidelines been considered during project planning.

Below, we’ll cover the basics of the new requirements, describe a path to compliance with minimum delays, and encourage those outside of the San Francisco Bay Area to stay informed on an issue with far-reaching implications that could pertain to their own operations.

An Overview of the PCBs in Building Materials Issue

Polychlorinated biphenyls are chemical compounds once used widely in the manufacturing of building products and materials like caulk, thermal or fiberglass insulation, adhesive mastics, and rubber window gaskets. Concerns over the effects of PCB exposure on human and environmental health caused the U.S. Environmental Protection Agency (EPA) to ban the production of PCBs in 1979, but many PCB-containing products manufactured between 1950 and 1980 are still in use. 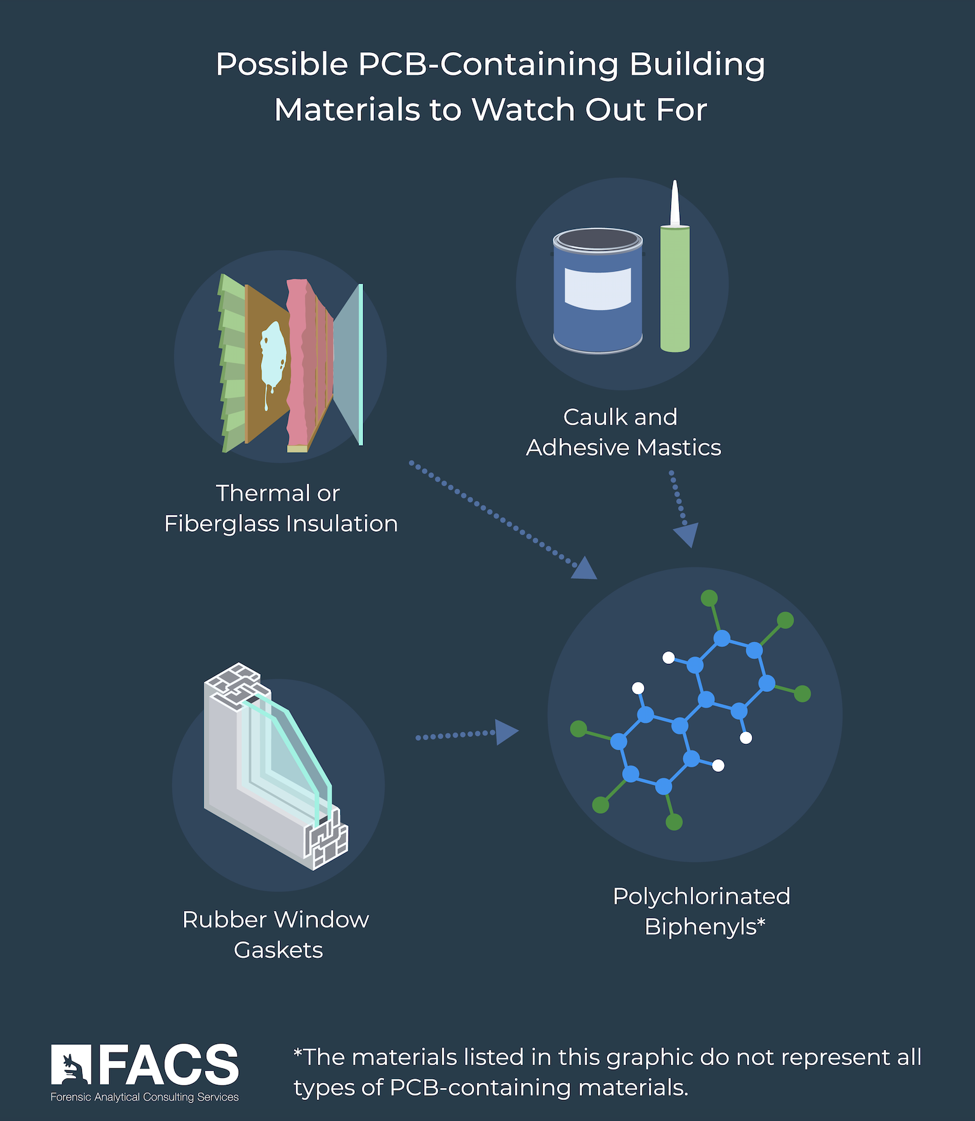 The BASMAA program seeks to identify potential PCB hazards in buildings so they can safely be removed prior to demolition, thereby helping protect the ecosystem of the San Francisco Bay.

Anyone applying for a demolition permit in the counties and municipalities listed below must now determine whether the structure was constructed or remodeled between January 1, 1950 and December 31, 1980. If so, the Applicant must then conduct a PCB screening assessment prior to demolition and use that information to determine whether the materials used in the building under consideration contain or are likely to contain PCBs at a concentration of 50 parts per million or more.

This requirement is now in effect in the following locations:

Note: Wood frame structures and single-family dwellings are exempted from the requirements.

Even though FACS and other concerned organizations tried to get this information out to building owners and contractors before the regulations took effect, many of those who should be aware of the new requirements aren’t.

Here’s a case in point: A Vallejo building contractor requested a demolition permit at the local municipality, and the clerk asked whether a PCB survey had been conducted. This was the first the contractor had heard of the requirement, so he called FACS. We performed the required survey and helped the contractor complete the Applicant Package.

By the time the permit was issued, though, the planned date of demolition had already been missed. Had the contractor considered the new requirements during project planning, the work could very well have proceeded on time. Instead, the project was delayed and costs increased.

How to Prevent Project Delays Due to PCB Regulations

It’s certain that getting the necessary permissions and complying with the law will add costs and require additional time for projects involving demolition in the areas covered by the BASMAA program. To keep those expenditures at a minimum, it’s essential to know what the requirements demand and how to navigate them smoothly.

That process begins with the PCB assessment — but, when should you schedule that survey for your demolition project? For best results, complete the PCB screening during project conception. The knowledge gained will help you make better decisions in subsequent stages of the work and give you a clear picture of the compliance path ahead.

If you obtain the PCB survey, follow the indicated steps carefully, and complete the required documents properly, you may be able to reduce the time delay significantly. FACS is ahead of the pack in this regard. The agencies involved often cite documents we’ve prepared as best-practice examples of how to complete the process.

And we do have good news to report: The EPA’s interpretation of  the Toxic Substances Control Act (TSCA) of 1976 is still evolving. We’ve observed that the steps to compliance for building owners is becoming simpler, not more complex. Should the survey discover regulated concentrations of PCBs, the abatement and disposal process can be streamlined when conducted properly.

Why Companies Nationwide Should Be Concerned About PCBs

PCBs gain entry to the body through inhalation of contaminated air (think of the dust created during building demolition) and by direct contact with the skin. Humans are primarily exposed to PCBs, though, when they eat contaminated meat (especially fish) or drink PCB-contaminated water. Hence BASMAA’s urgency to enact safeguards to lessen the impact of PCBs on San Francisco Bay.

But San Francisco isn’t the only place in the United States where PCBs are a concern. News reports about the dangers of PCBs are commonplace:

Those are just three stories currently in the news. There are many more, and it’s likely that public demand for tighter control measures on PCBs in the environment will continue to expand. We may be seeing the front end of a problem that will increasingly impact building projects for years to come.

Will PCB Regulations Impact Your Business Next?

The new PCBs in construction regulations are catching companies in the San Francisco Bay Area by surprise — even though there was ample warning the changes were coming. Building owners and contractors are having to reconsider their timelines and profitability expectations to account for a concern that has been in place for years, but didn’t receive much recognition — until now.

Prior to the BASMAA guidelines, contractors could largely ignore PCBs during building demolition, but times are changing. By requiring PCB assessments prior to demolition, however, BASMAA has pointed a spotlight directly onto a problem that can no longer be ignored. Given the growing concern over PCBs in building materials and the pressure being placed on the EPA to protect the public interest, your region may be next in line for national attention.

At the very least, this issue can delay the demolition permitting process. At the next level, it can require unplanned expenditures that can significantly boost the cost of a building demolition. And we would be remiss not to mention the potential legal entanglement failing to properly identify and dispose of hazardous materials can pose to property owners and the contractors who assist them with a project.

For a deeper look at the situation in California, see our recent article, PCB Assessments Required for Building Demolitions: Important Changes to Note.

To discuss a present concern or to get advice on how to proceed on a current or planned project, call FACS at 888-711-9998 or use our contact form to find out how we can help your company avoid unnecessary delays on your next project.

FACS is one of the country’s leading and most diverse industrial hygiene consulting firms. Our clients include hospitals, multifamily property management, construction contractors, government agencies, and other businesses and organizations nationwide. Contact us or call (888) 711-9998 to get further information.