These Changes Will Affect Every General Contractor, Trade Contractor, Maintenance Team, and Custodial Crew in California

Cal/OSHA has been working for over eight years to revise its Lead in Construction (8 CCR 1532.1) and Lead in General Industry standards (8 CCR 5198).

The current laws were essentially copied from federal regulations and have been in place since 1979. With the signing of California SB 83 and California AB 35 by Governor Newsome, significant new requirements for worker protection and training are set to be issued in September of 2020. If the changes to Cal/OSHA are adopted as currently written, blood lead level monitoring may be required by nearly every building contractor and building maintenance crew in California.

In this article, I’ll cover the basics of the new regulations and show you how to minimize the impact on your operations. The rules aren’t set to be implemented until September of 2020, but taking action now could save your company significant time, trouble, and money.

An Overview of Lead in Construction Law Changes

Two significant revisions and dozens of lessor changes are proposed in the new rulings. These changes were discussed by California regulators and industry stakeholders, settled on and then put on hold long enough to have been forgotten by many.

According to Cal/OSHA there have been a few additional revisions to the proposed regulatory changes, but the agency will not release those changes until the public comment period is opened. This 45-day discussion window is expected to open within the next three to six months, if not sooner.

The first of the two most important changes to the law require a reduction in the permissible exposure limit (PEL). The PEL will drop from 50 micrograms of lead per cubic centimeter (ug/m3) of air to 10 ug/m3. Many requirements kick in when workers are exposed above this new level including requirements to wear protective suits, use a respirator, and take an on-site shower after exposure. Water from the showers cannot be discharged directly to a sanitary sewer system or to the environment in general, unless sampled and/or treated to confirm it is not a hazardous waste. 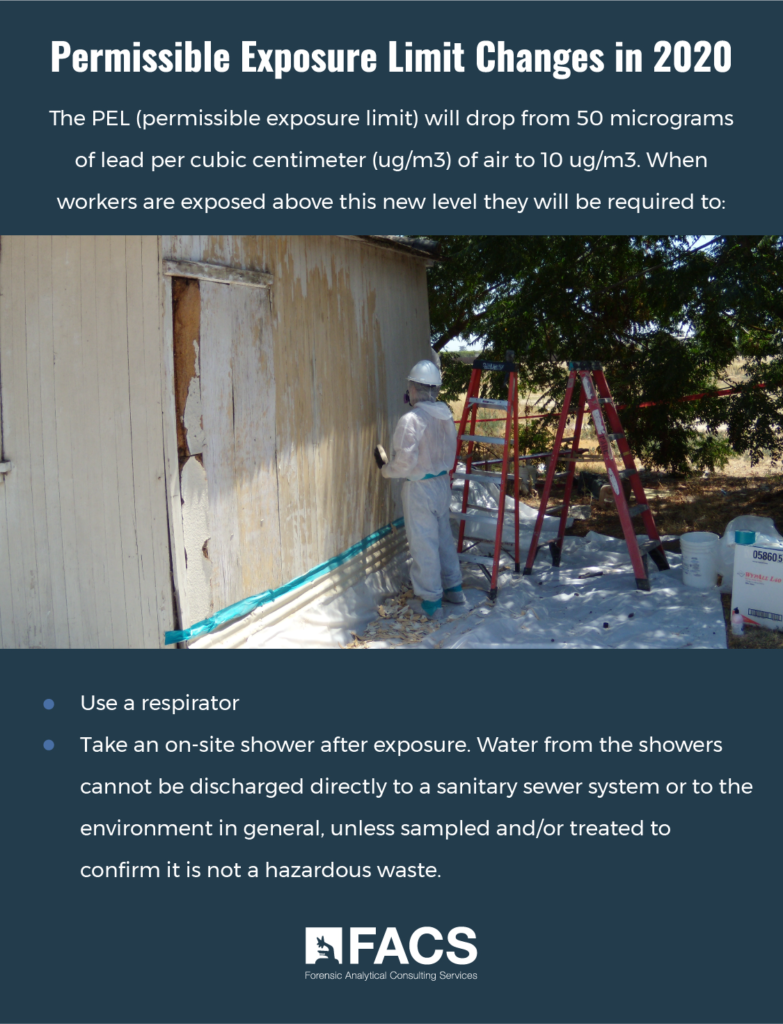 The second – and potentially much more significant – change for most contractors and maintenance crews, will be a reduction in the action level.

Under the updated regulations, you’ll be required to conduct the following activities on any jobsite where exposures, regardless of respiratory protection,  exceed 2 ug/m3 rather than at the current action level of 30 ug/m3: 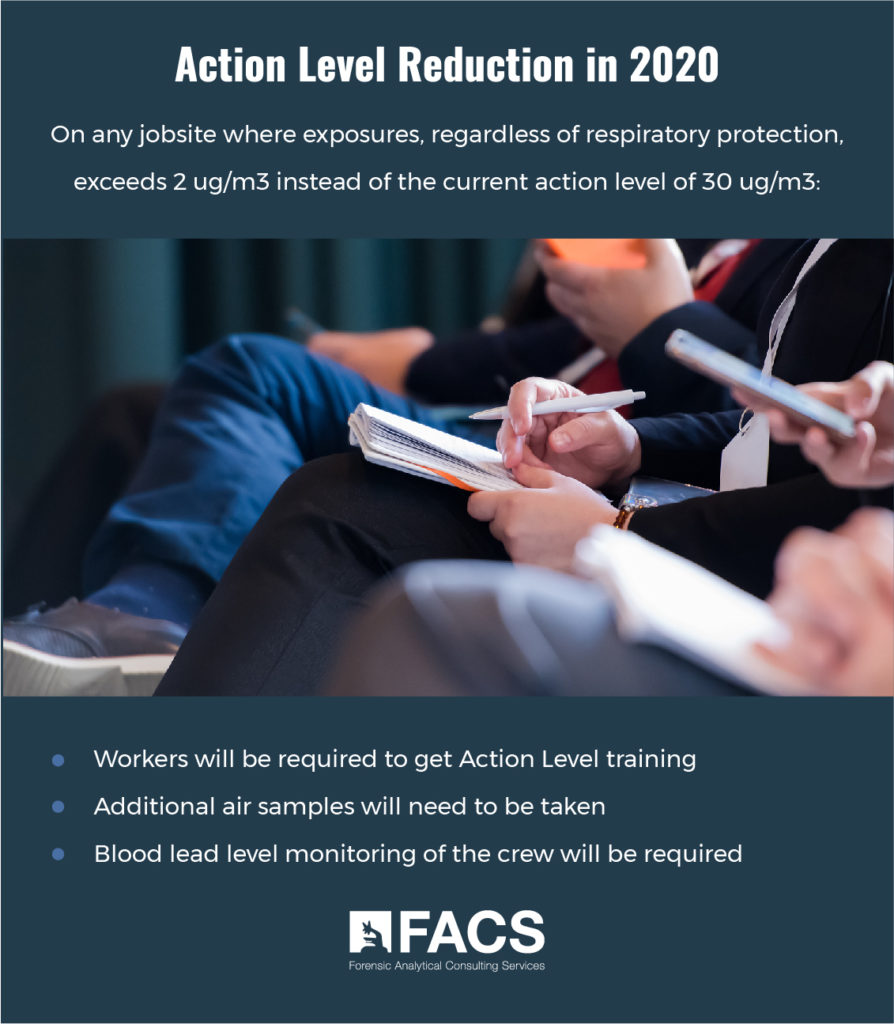 This means all contractors, even those working on new construction, must comply with lead disturbance requirements that are much more stringent than those in the past. For instance, a level of 2 ug/m3 of lead in the air can occur when the wind is blowing soil with low-level lead contamination onto the job site.

While this will be more problematic when soil is trenched, excavated, or graded, it could happen without any active soil disturbance. Furthermore, poorly controlled actions of one contractor could expose the entire construction site (and all other contractors working at the site) to lead levels that would trigger those additional protections for workers.

Those affected by the upcoming changes will be wise to prepare by collecting air samples on their crews now, rather than later.

Air samples collected in the next ten to twelve months that show lead exposures for activities the contractor traditionally conducts below the new action level would establish a negative exposure assessment that would be valid for up to 12 months.

You’ll need sufficient time to schedule the testing, get the results, and make any necessary modifications in your work practices and controls. Give yourself plenty of time to complete the process.

If you find it will be impossible to conduct some of your activities below the new action level, or perhaps even below the new PEL, plan now to account for the impact on your job costing estimates and bids. Make sure they’re part of your budgeting for outlays of both time and money on projects that occur after the revised rules take effect.

Here’s one more significant issue you must understand:

The current process for analyzing lead air samples is flame atomic absorption (Flame AA). The Flame AA method used in most labs has a limit of quantification (or reporting limit) near  3 ug/m3 … and that will not be sufficient to indicate a result below 2 ug/m3.

Air sample analysis will need to be conducted by inductively coupled plasma (ICP) or graphite furnace (GF) analysis in order to return a valid result for the new limit. ICP and GF analysis cost more than Flame AA, but the results will stand up against challenges to your operational decisions. 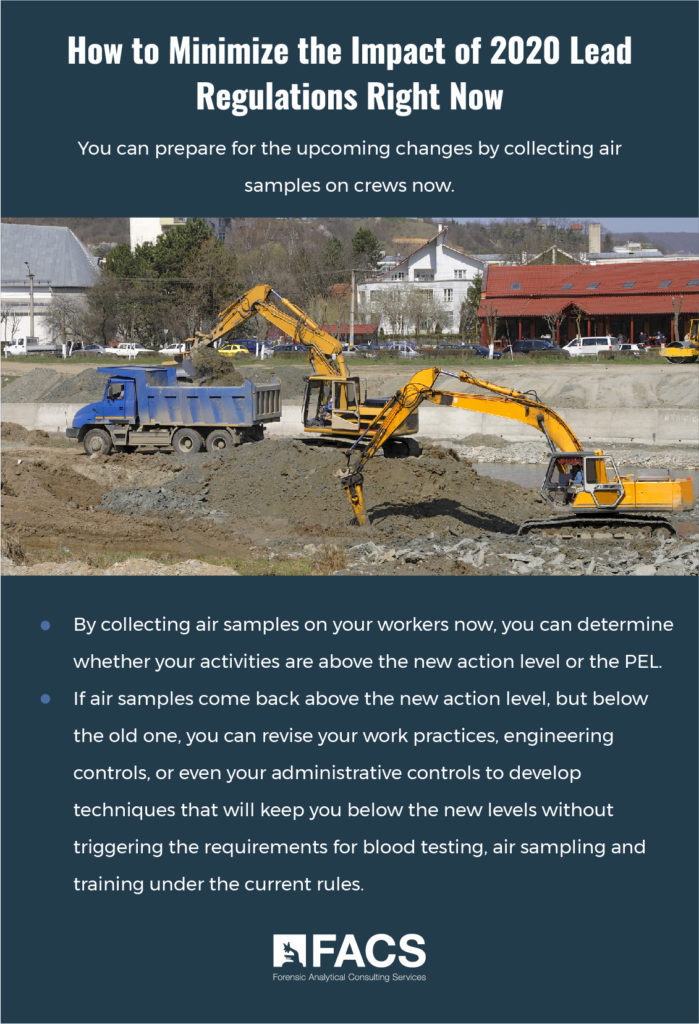 Collect air sampling data at your current worksites now. Watch for the public commenting period to open, and use the results from those samples to inform your participation.

To find out more about the proposed regulations, to discuss how you and your team can revise work practices and engineering controls to stay below the proposed action level and PEL, or to schedule Action Level Training, call FACS at (888) 711-9998 or use our contact form.

FACS is one of the country’s leading and most diverse industrial hygiene consulting firms. Our clients include hospitals, multifamily property management, construction contractors, government agencies, and other businesses and organizations nationwide. Contact us or call (888) 711-9998 to get further information.