You’re attending an event at a public school, and you’re thirsty. Your choices are to buy a soft drink from the machine or refill your empty water container at the drinking fountain in the hallway. You’d prefer a cold bottle of spring water, but that selection is sold out.

Question: Would you have any fear at all about the safety of the water in the school fountain? You’ll probably want to run the water a little before you use it, and you surely wouldn’t place your mouth over the outlet — but you’re at a public school. The water is definitely suitable to drink … right?

Turns out that the drinking water in at least one outlet at close to half of all public schools in the United States exceeds the EPA action level for lead in water. In other words, it’s not suitable for human consumption.

How can that be?

This article will look deeper at the problem, then propose a set of action steps school administrators can take to help protect students, staff, and the public from lead-contaminated drinking water. 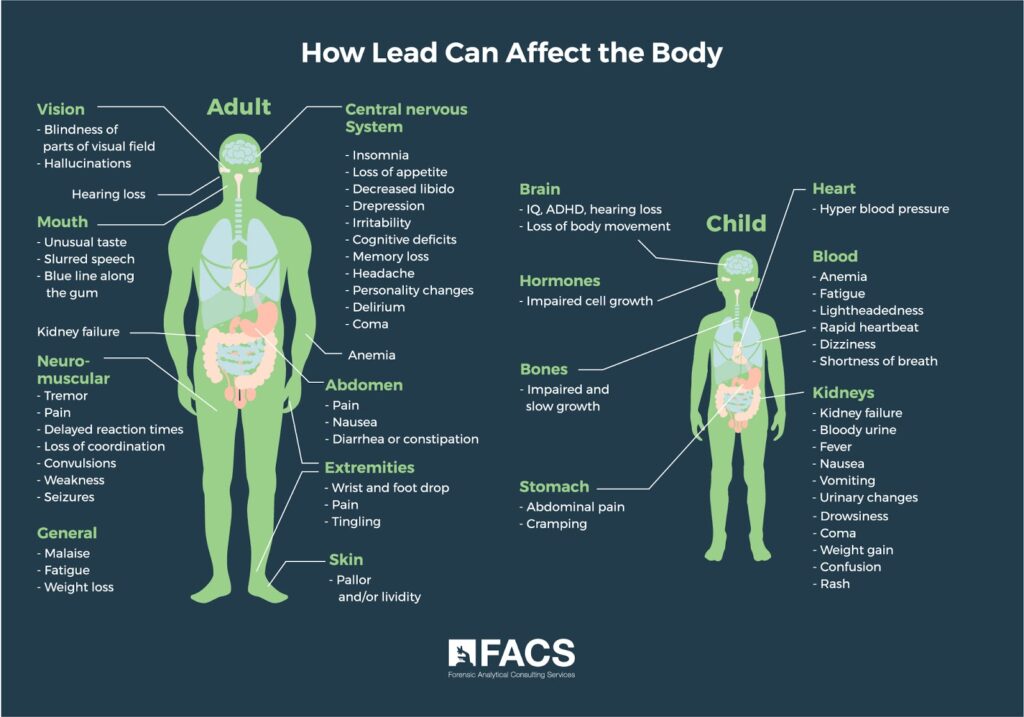 Lead in School Drinking Water: How Dangerous Is It?

Here’s a list of relevant questions and answers concerning the presence of lead in school drinking fountains.

At what level, does lead become a health hazard?

Experts agree there is no safe level of exposure to lead. None. The public health goal for lead in drinking water, as set by the Environmental Protection Agency (EPA), is ZERO, although the Safe Drinking Water Act places a maximum allowable level at which a product or service can be called “lead-free.”

How long does lead remain in the body?

Here’s one of the most worrisome facts about lead: It is toxic (capable of causing death or serious health issues) and it is persistent (lead can accumulate in the body). Many poisons, if ingested, can be flushed with the proper protocol. Lead is not only easily absorbed into the body, but it can accumulate in bones, blood, and tissues over time. The lead-contaminated water you drink today can bioaccumulate and pose an ever-increasing danger to your health. 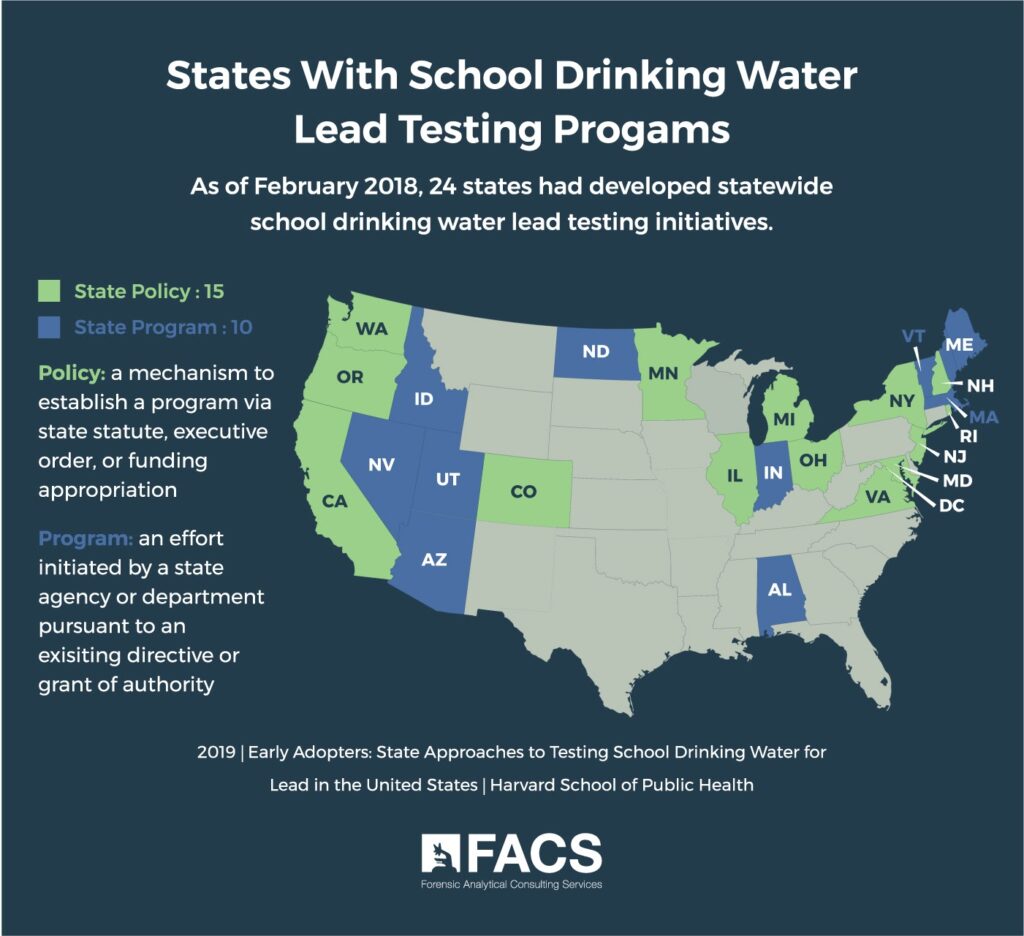 Why is there lead in the drinking water at many schools?

Why haven’t lawmakers and school administrators addressed the problem?

Federal funding is tight, and schools don’t have the money to address the issue. When the problem is brought to light, however, action typically follows. When a survey of schools in New York State, for instance, revealed that 82 percent of public school buildings had at least one water tap that tested positive for lead, New York became the first state in the USA to require schools to test for lead in drinking water.

What are the risks associated with lead in drinking water?

Adults exposed to lead can suffer cardiovascular problems, kidney malfunction, and reproductive problems. Lead can cross the placental barrier and lead to premature birth and reduced growth of the fetus. And lead’s effect on children can be devastating: learning problems, behavior problems, hearing problems, lower IQ, and slowed growth.

What can schools do to solve the problem?

Once proper testing has confirmed the presence of lead in a school’s drinking water, the first step is to take that water source out of operation. Solutions include replacing the service lines, filtering the water, installing a reverse-osmosis system, and implementing a flushing protocol to keep lines clear of lead. The effectiveness of each option will vary site to site. 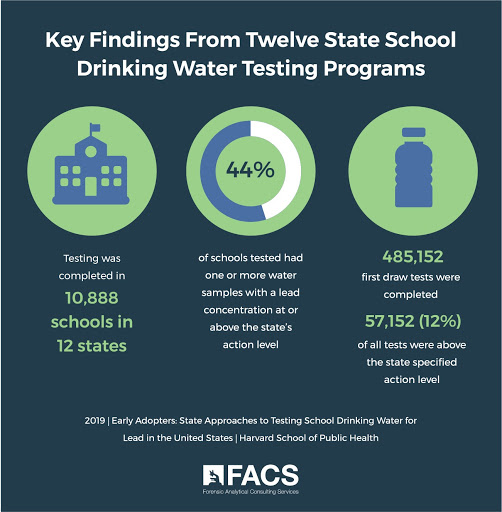 A 2018 Harvard research study found that less than half of U.S. states required schools to test for lead in drinking water. While it’s encouraging to see many states follow New York’s lead in the issue, and there’s hope that other states will adopt their own protective measures — one big problem remains: Depending on how it is conducted, testing may not reveal the true scope of the danger. Proper testing and monitoring is required before we can understand the depth of the issue.

California regulations, for example, require that only five samples be taken, and that’s not nearly enough to evaluate schools that may have dozens or even hundreds of potable fixtures. To be trustworthy, the sampling plan should include a representative sample covering the entire site. It should also be implemented over time to capture a truer picture. The degree of lead leaching can vary depending on time of year, outdoor temperatures, water temperature, and other factors.

Lead detection can also be influenced by the “flushing” of lines prior to testing and whether aerators and filters are left in the system or removed before the testing process begins. Standardized and accurate testing procedures are essential.

Even if proposed changes to the EPAs Lead and Copper Rule force states to test for lead, much will depend on the testing and monitoring protocols established. It would seem that crises like those reported in Flint, Michigan and Newark, New Jersey — coupled with the fact that children are especially susceptible to irrevocable damage from lead poisoning — would be enough to cause us all to pull together to do whatever is necessary to protect public health, but no real solution is currently in sight.

Lead in School Drinking Water: What Can Be Done Now?

First off, lead is not typically a naturally-occurring substance in most water sources. Lead contamination generally occurs from contact with various plumbing system components. Every attempt to deliver an unbiased, fact-facing report on whether or not lead is impacting the drinking water at a particular location must begin with a comprehensive site risk assessment comprised of the following steps:

Once a high degree of certainty regarding the current situation is established and any necessary corrections are made, it’s important for the facility to implement a water management program to protect the water supply and continue monitoring water quality.

There are no quick fixes for this problem. A long-term approach is required. Furthermore, lead toxicity isn’t limited to schools. The drinking water at many businesses and homes is contaminated with lead. The problem is much larger than most people realize.

Lead in drinking water is a public health threat that can pose a significant health threat to anyone unwittingly exposed to the danger. To knowingly expose children or adults to lead is an unthinkable mistake with far-reaching consequences.

Contact Us to Speak with an Environmental Health Expert Today